The document has moved here. 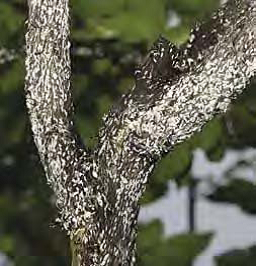 Azalea – Bark Scale – DESCRIPTION, SYMPTOMS, AND SIGNS: Resembles a mealybug with its white wax covering, but not from the same family.  Adult females are approximately three mm in length, with a dark red body that is covered by a white waxy egg sac. Males look similar to females, but are only half as long.  Overwinters as immature pregnant females and matures in spring. Crawlers migrate to small branch crotches or to leaf axils.  Nymphs feed in these protected areas and mature into either males or females to reproduce and start another generation (one generation in northern climates and two generations in the South annually).  Heavy infestations can cause stunting of growth and reduced vigor of the plant.  Infested plants become chlorotic (yellow) and under heavy infestations can cause dieback of stems and branches, coated with the black sooty mold fungus that grows on the honeydew.

• Control applications should target overwintering nymphs in the fall (September–October) and newly hatched nymphs in the late spring (South) and early summer (North). 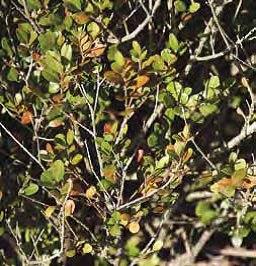 Plants wilt and growth is stunted.  Leaves are at first light green, fading to yellow, bronze, or straw-colored.  Leaf symptoms may be localized within the plant or occur throughout.  Leaves will turn upward and lateral leaf margins typically roll.  Bark at the base of the plant becomes infected and is easily removed from the wood.  Once foliar symptoms are visible, roots have diminished.  Roots turn dark brown to black and then die. The pathogen can be dispersed in water and with soil, diseased plants, infected plant debris, contaminated tools, and equipment.  No obvious fruiting structures are formed.

• For protection against this disease, apply a fungicide drench prior to symptom development. 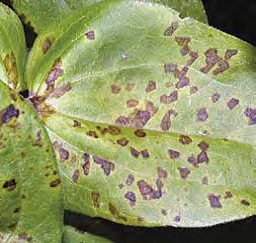 Hydrangea – Alternaria Leaf Spot – DESCRIPTION, SYMPTOMS, AND SIGNS:  Alternaria causes brown to black spots to form along the leaf margins and sometimes on the leaf petioles.  Spots that develop elsewhere on the leaf are generally oval.  The disease may cause leaves to fall prematurely.  When the disease is severe, entire leaves may die.  It is most probable that this fungus survives on fallen leaves.  In the spring, spores infect new leaves. 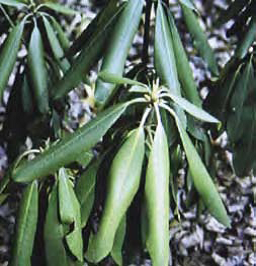 in the landscape.  It is a water-mold disease that thrives in wet conditions and in poorly drained soils. The most common symptom is a wilted plant with curved leaves and a yellow color. Roots will appear black and soggy and have a musty odor.  Plants may appear to be suffering from lack of water, but ironically, too much water is the problem.  The fungus destroys the roots as it works its way into the stems.  Symptoms may develop ov

er a period of several weeks, but it may take a few months before the problem is detected.

• It is important to prevent this disease initially, because chemical controls can be ineffective once the problem is widespread.

• Choose resistant varieties and monitor irrigation carefully. Cut back on watering during times of excessive rainfall.

• Regularly inspect roots to look for signs of the disease.

• At first sign of the disease, use a soil drench treatment of a registered fungicide. 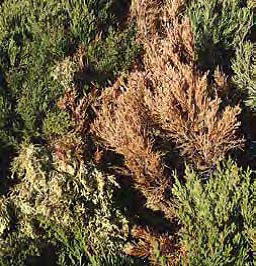 s on trunks of young, rapidly growing trees can be as great as two feet long.  Severe infection can kill entire plants.  Pathogen survives winters and dry summers in colonized bark.  Most infections are caused during wet weather.  Wounds on twigs and branches are common infection sites, but intact foliage can be infected.  Fungi colonize bark and sapwood and produce spores within several weeks.  Spores are dispersed locally in splashing and running water.  The spore can survive several weeks, up to a year, in dry conditions.

• Can be transmitted via pruning tools, infested seed, and on planting stock.

• Prune out and discard infected branches and stems. Be sure to cut into clean wood.

• No chemical control measures recommended for the disease in the landscape or nursery. 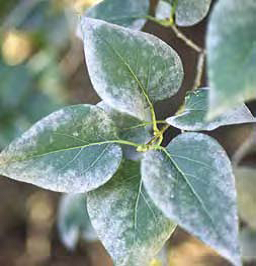 Lilac – Powdery Mildew  DESCRIPTION, SYMPTOMS, AND SIGNS:  Powdery mildew is a common fungus that attacks many nursery crops, including lilacs. The fungus obtains nutrients from the plant causing leaves to turn yellow and drop prematurely.  Leaves become covered with a thin layer of irregular gray-white powdery material.  New growth is often stunted.  The wind spreads the white powdery spores from branch to branch and plant to plant.  In late summer, small black spots (spore producing organisms) are found scattered over the white patches as the disease prepares for overwintering.  This disease occurs in a variety of environments, but primarily in humid conditions in the spring and fall.

• Apply registered fungicides at the first signs of disease, being sure to get complete coverage on the upper and lower surfaces of the leaves.