WHY TURF DISEASES HAPPEN:  No matter the setting, turf disease is a challenging malady. The traditional disease triangle components of host, pathogen and environment influence the degree of damage that’s experienced from north to south, in residential lawns and shopping malls, and on all species of turfgrass.  When season of year is added to the mix, some considerations change and some remain the same. One difference between many spring and fall scenarios is the expectation of the customer, or the aesthetic appeal, of the turf.  In fall, the tendency (at least in the mind of some customers and property owners) is to just sort of give up when the turf starts to look a little stressed and not take any control measures-until their turf or commercial property is damaged as a result.

Inspect regularly
Late summer and fall turf diseases are weather-dependent maladies.  Because weather conditions often change quickly, an outbreak can suddenly erupt.  The first step in dealing with these causal agents is to regularly inspect lawns.  Some people call it scouting and others call it monitoring.  Whatever you call it, our trained technicians are always on the lookout for turf damage when we’re working at your property.  An inspection is a thorough, close-up look for disease symptoms.  There are several ways to go about inspection, with the nature of the variety of services provided being the best way to determine the best approach.   Technicians are able to identify that something’s wrong and that it requires a more thorough investigation. Another opportunity for inspection can be taken when we are on your site for fertilization, Tree & Shrub care services, or Organic Tick & Mosquito Reduction sprays.  When technicians  finish with product dispersal and are blowing material from impervious surfaces (such as sidewalks and driveways) back to the turf areas, observations about odd-looking turf can be noted and communicated to other staff better versed in diagnosis.  Regardless of the arrangement, regular inspection is a good idea. 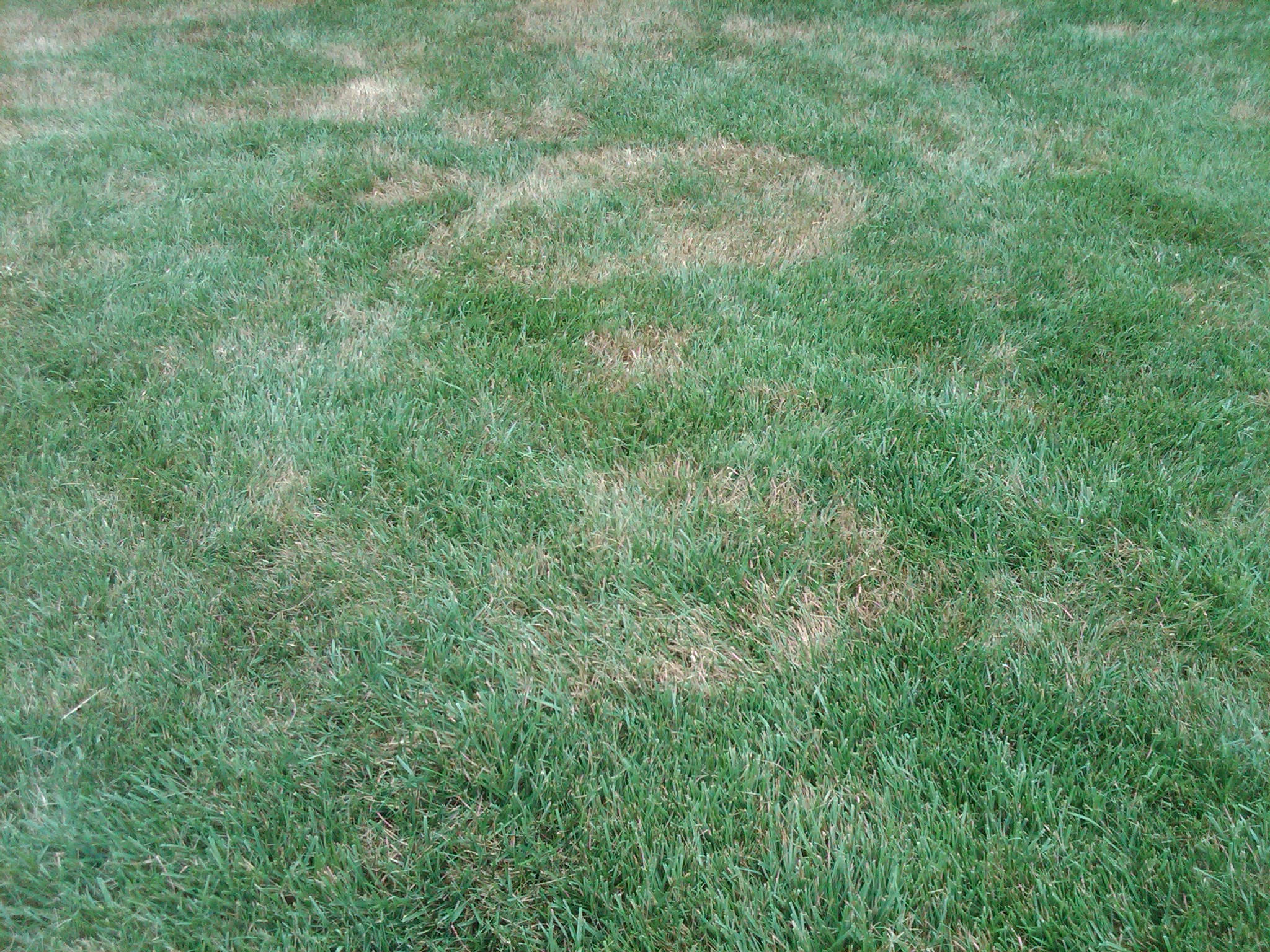 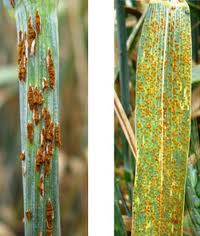 Stem Rust.  Of all the late summer and fall turf diseases, stem rust is perhaps the easiest  to identify.  Rust-infected leaves appear yellow or orange, even from a distance.  When leaves are disturbed, clouds of orange rust spores can quickly discolor shoes, mowers, grass catchers, shoes and pant legs.  When looking closely at affected leaves, the presence of orange or brick-red pustules are evident. The spores within the pustules rub off easily when touched.  Each pustule contains many spores, capable of infecting nearby grass blades.  Under ideal conditions of warm days and moderate night temperatures common in late summer or early fall, this pathogen can spread rapidly.  Rust-affected turf becomes weak and thin, and unable to resist other common diseases or various environmental stressors.

Leaf Spot/Melting Out.  While this is most often thought of as a springtime disease, a reoccurrence is possible in some years, especially when cool and moist conditions are prevalent for several weeks in early fall.

nitial symptoms are small oval purplish to black spots on leaf blades. Over time, the spots become more numerous and

appear as beige-colored centers surrounded by dark brown or purple margins. Eventually, the “melting out” stage develops as the disease works its way into

the sheaths and crowns of the plant. From a distance, affected turf looks light brown and thinned. 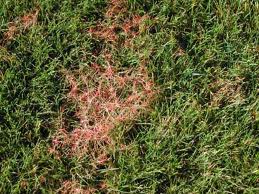 Red Thread.  Like leaf spot, red thread is often thought of as exclusively a springtime disease, however, after disease activity ceases during hot, dry summers, it may resume in the fall. The pathogen survives the summers as sclerotia and dormant mycelium in infected turf plants and is often spread by mowing equipment, especially during damp weather conditions. Red thread is a good descriptor for this disease, as symptoms appear as patches with a pinkish to tan cast.  The presence of uninfected grass blades intermingled with infected leaves gives the patches a scorched or ragged look. Individual blades die from the tip downward, affecting mostly the leaves and leaf sheaths. In moist autumn seasons, leaves become covered with pink gelatinous strands of mycelium that often stick together. 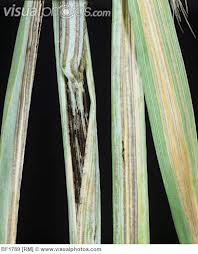 Stripe Smut.  Stripe smut is a cool weather disease that shows up in spring and sometimes in fall. Like red thread, once a plant   or group of plants is infected, it has a greater tendency to resume growth later in the season. As well, smut spores can remain dormant in the thatch for up to three years. Infected plants take on a generally yellowed and unthrifty appearance, usually resulting in an early death. Smut-infected plants usually occur in 6- to 12-inch circular patches, and can coalesce to form larger areas. Leaves on infected plants show yellow stripes that later turn grey and black. Eventually, the leaves shred and curl.  In spring, removing clippings of infected plants will reduce the overall level of inoculum as smutted leaves release masses of spores into the thatch after they curl. Traditional best management practices for turf are also recommended. 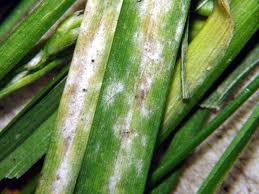 Powdery Mildew.  Powdery mildew appears in the turf as if the leaves were dusted with flour, casting a white soft hue on them. In most landscapes, it develops in shady areas and/or where air movement is insufficient. Cloudy weather and high humidity favor its occurrence. Turf areas under shade trees and the north and east sides of houses or buildings are likely locations for infection. Affected leaves turn from white to yellow and eventually die, causing a thinning of the stand. Control can best achieved through a change in the landscape to improve sunlight penetration and increase air flow across the sod. Removing trees and thinning is a drastic step, and not recommended; the effect is usually temporary as well. Better results will be achieved through changing the landscape design to put shade-tolerant groundcovers, perennials and shrubs in place of turf. If clients insist on retaining turf, fungicides provide effective control. 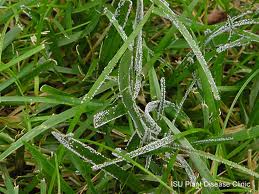 Slime Mold.  Though not a true disease, this problem is a real concern for the uninformed customer or property owner. The good news is that no control is necessary, other than regular mowing to remove the sack-like spore enclosures that most customers find offensive.  Slime mold fruiting bodies create a slimy growth that dries into a powdery mass that coat the grass blades.  Fortunately, they are more of a curiosity or nuisance than a threat to the turf.